Reason #56: A safe place for Audrey’s kids to play 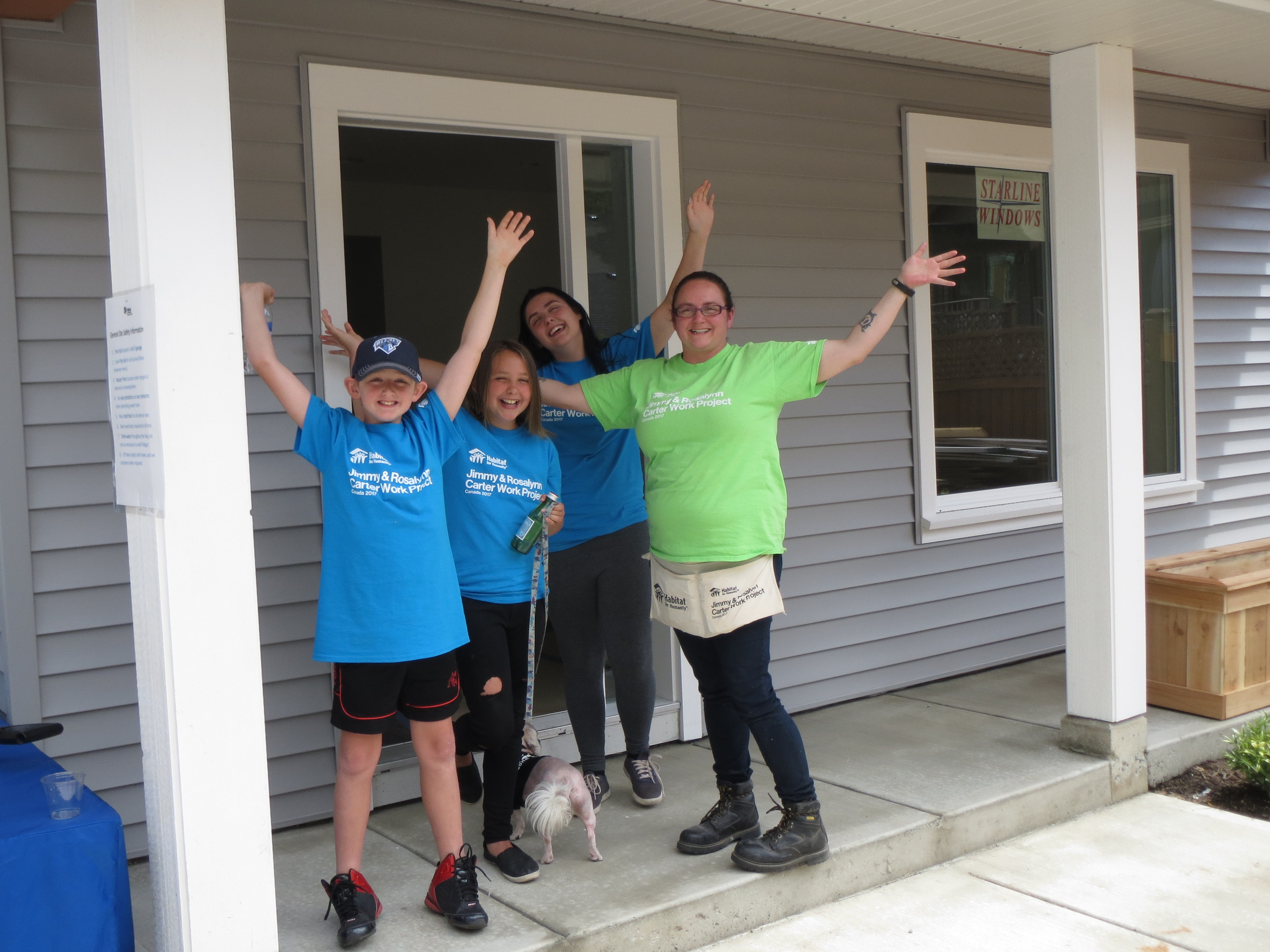 To celebrate Canada’s 150th, we’re building 150 homes with 150 families in need of a decent and affordable place to live. From July 9 to 14, volunteers across the country came together to work alongside future Habitat homeowners to help build their homes, which will be completed throughout 2017. Audrey and her three children are just one of the families partnering with us to achieve the strength, stability and self-reliance needed to build a better life.

Audrey describes her children as “explorers.” Like a lot of kids who have the opportunity to grow up in beautiful British Columbia, they’re drawn to the outdoors.

“They don’t want to stay inside,” she says. On the rare occasion they do get the chance to go camping, she says “they’re gone,” off hiking through the nearby bush almost immediately after stepping foot on the site.

For the past three years, these camping trips have been some of the few opportunities that her kids — Angel, Anastasia and Averie — have had to safely roam outside. The four of them live in a deteriorating subsidized housing complex in downtown Nanaimo, where many of the other tenants suffer from substance abuse.

“When I take my dog outside, I always make sure to check the ground — there have been plenty of instances where I’ve found drug paraphernalia out front,” says Audrey, who isn’t comfortable leaving her kids on their own, or even allowing them to go outside without a buddy. When they do take their dog out for a walk, she expects them to go out in twos and head in the opposite direction of anyone who might be hanging around their building.

Unfortunately, they can’t find sanctuary inside their home, either. Plumbing issues in the unit above have led to countless water leaks in their place, and Audrey says that the resulting damage was never properly addressed. In one instance, when a burst toilet line caused water to flow into her daughter’s bedroom through her light fixture, their landlords simply pulled out the fixture and drained the ceiling. When they attempted to fix other walls in her family’s unit, which were also ruined by water leaks, none of the drywall was replaced. Instead, she says they simply cut out the paint, puttied over it and repainted, which has led to patches of mold growing in at least four different rooms of their place.

When a new tenant moved into their complex and began verbally abusing her children nearly every time they went outside, Audrey hit her breaking point. She says the kids couldn’t even step out to feed the fish in the nearby pond without the woman harassing them.

“It’s been a constant battle” she says. “Our landlord has tried to deal with her as well, but to no avail.”

Unfortunately, as a single mother of three, she simply couldn’t afford to move to a more suitable place. That’s when she decided – thanks to her father’s suggestion – to apply for a partnership with Habitat for Humanity, which would require volunteering 500 hours of her time, paying an interest-free mortgage for the fair market value of the home, and taking classes in home maintenance and financial budgeting to ensure she could manage the house on her own. When she later received a phone call from Habitat Mid-Vancouver telling her she’d been selected to partner with them, she was overjoyed.

“I cried when I found out I’d been selected,” she says, a little reluctant to admit. “Our living situation had gotten really bad at that point.” The same day she received the call from Habitat, emergency services were called to the building next door for three separate drug overdoses.

Her family’s new Habitat home is located in a quiet subdivision on the outskirts of Nanaimo. When asked how the neighbourhood compares to where they were living before, Audrey says there is no comparison.

“On a scale of 1 to 10, it’s a 100,” she says. “I hung out in the area when I was young, and it’s a great place to be when you’re a kid.” Unlike their current place, there are lots of other kids in the neighbourhood, and even a few schools nearby. But after living in substandard conditions surrounded by people they couldn’t trust, a sense of security is what’s most important.

“First and foremost, it’s a safe neighbourhood for the kids to play and have fun,” she says. That’s what she believes will have the biggest impact on their day-to-day life.

Research by the Canada Mortgage and Housing Corporation (CMHC) showed that Habitat families tend to be happier and healthier after moving into their new homes, and the effect on children was profound. Sixty-five percent of Habitat homeowners reported an increase in their children’s confidence. Their participation in extracurricular activities, like sports, art and music, also increased once they had a safe, decent place to live, and Audrey is confident that their new house will have an equally positive impact on her kids.

“Now that my children don’t have to worry and they’re able to just be kids, as they should be, I think there will be an astronomical change in their attitudes, their behaviour, their schooling,” she says. “And that will make things easier and less stressful for me.”

She says she’s not at all worried about how they’ll adjust to the new house or neighbourhood — she is, however, a little concerned about how she’s going to get them to stay in and help her unpack.
“All they’re going to want to do is head outside and explore,” she says with a smile.

Providing a safe place for kids to play is just one of our reasons to build. Share your reason to build on social media using #150ReasonsToBuild.

Back to Blog
Donate Now
Back To Top